For anyone who has spent any time at sea, there is no denying the calming influence of a day’s sailing.  Tex O’Grady knows firsthand its positive effects and is now turning his attention to helping other veterans with his sailing yacht, Mystic.  Tex is no stranger to PTSD as a sufferer himself from his time in the navy.  This venture is the latest in a long line of charitable work.  Currently, his yacht is on the hardstand as a guest of Gold Coast City Marina & Shipyard (GCCM) to complete a refit to ready the yacht for welcoming on board veterans and first responders.

It would be an understatement to say Tex has had a full life.  He was a submariner for 20 years, has worked as an auto mechanic, truck driver, commercial pilot, raced motorcycles professionally and been a skipper of the navy-owned Riviera, Admiral’s Barge, on Sydney Harbour as well as other charter boats.  Yet, his crowning achievement, the reason most people will know him, the most iconic feature of this amazing life is his work with his motorbike riding dogs.  Yes, his motorbike riding dogs….two of them, Cash and Bundy.

Both are Blue Heelers and both came into Tex’s life as a calming influence.  Cash was his first dog and had attitude plus.  He wasn’t trained as a therapy or assistance dog and Tex hadn’t even really identified himself as having PTSD.  Yet, the sleepless nights, nightmares and panic attacks disappeared with Cash.  It wasn’t long before Tex had taught Cash to ride on the bike.

In 2005 Cash died and Tex was not inclined to replace the irreplaceable.  Yet after 12 months, he knew it was time and he needed the calming influence back.  It was no easy task and he saw close to 250 dogs then he found a breeder of stumpy tail cattle dogs in Mudgee.  It was there he found Bundy.

“She picked me.  She walked straight up to me and I knew.  I loved Cash, and Bundy did not replace him.  She is so different, so calm, confident, placid and loving,” explains Tex.

Bundy became a certified therapy and assistance dog and like her predecessor, learnt to ride a motorbike.  She is the first dog in the world to ride over 1 million kilometres on a motorbike.  She has a Ministerial Declaration to ride and has been clocked at 283 klm/hour at Eastern Creek.  She has ridden a jet ski from Philip Island to Cairns, not by herself and over a significant period of time.

“Many have been shocked and worried about Bundy’s welfare when it comes to bike riding.  Yet when they see her in action, they see how much she loves it.  I would never force her and she is always harnessed to me.  Now she is in her sunset years, she has retired from riding, but her charity work continues,” says Tex.

Tex’s charity work started back when he was in the Navy and since then he has raised money and the profile of hospitals, medical and research facilities, and environmental charities.  Yet, he and Bundy have made a name for themselves in charity ride leading many across the country including the Barry Sheen Tribute Ride. Together, they have raised $6 million over 12 years.

“What makes Bundy a good motorbike riding dog is the same attributes which make her a good therapy dog, she is calm and trusting.  She will be an asset to our new veteran sailing program,” continues Tex. 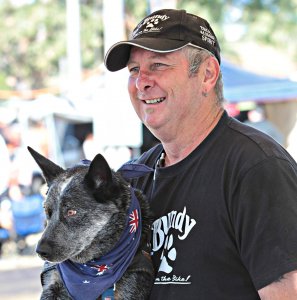 With a naval background and a love of fishing, Tex has always been in and around boating.  Originally, he had another boat earmarked for this charitable venture but when Mystic came on the market, it was clear this was the best option.

“She is a solid 42-foot ketch rigged Roberts Spray steel boat.  We spent months working on her to get her off the hardstand and onto the water before sailing her up to GCCM to complete the refit.  With everything we needed onsite, GCCM was simply the best place for us to do this work.  The support we have had from GCCM and its tenants has been wonderful and without it, would simply mean we could not offer sailing to those affected by PTSD because of their service to the country,” states Tex.

Jasen at JCMS has removed the rig for complete refurbishment.  Southern Seas Marine has been assisting with new equipment.  Wrapit Marine is assisting with signwriting.  Sail Inc is working on the sails whilst Ribforce is helping out with the tender’s engine.  Sweep Marine Services are rebuilding the tanks and many of the other tenants pitching for this worthy cause.  GCCM has sponsored the lift and hardstand and local radio station, Rebel FM is following their story.  It is all hands to the winches to get Tex, Bundy and Mystic out on the water providing much needed relief to those with trauma.

“When approached to assist Tex and Bundy, we knew it was the right thing to do and a cause worth supporting.  There are so many who give so much to our country and we need to give back where we can.  At GCCM, we also love our dogs.  It is great to see so many of our 90+ tenants assisting as well,” says GCCM’s GM of Customer Experience and Facilities Management, Luke McCaul.

For over 20 years GCCM has been lifting, servicing, repairing and refitting boats from jet skis to superyachts.  The 17.5-hectare facility has over 90 leading marine businesses onsite covering every conceivable trade.  It was the logical and best place for Tex to get all he needed done to Mystic.

For those wishing to contact Tex to contribute or any returned services or emergency response personnel wishing to go sailing should contact them through their Facebook page: SV Mystic – Sailing for Veterans/EMS.  Also keep your ears out on Rebel FM to hear more of the story.