It is the first time projects of this nature have been completed in Australia highlighting the innovation inherent in GCCM. 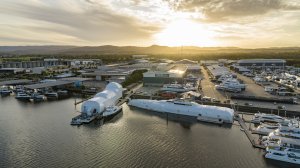 In early 2020, GCCM was approached by the representatives of both Dragonfly (74 metres) and SuRi (63 metres) seeking a solution to refinish their hulls and superstructures without the expensive of lifting out of the water.  Rising to the challenge and drawing on the global expertise of the core team and onsite tenants, GCCM devised an onwater solution which met the highest quality and environmental standards.

The solution required the construction of numerous floating platforms on which scaffolding could be erected to total encapsulate the yachts for regulation of the work area’s climate and preventing contaminates affecting the surrounds or the waterway.  The solutions was so effective work continued even through some the heaviest rain period experienced in recent years.

“These groundbreaking projects have proven that GCCM has the capability and capacity to refit and repaint sizeable yachts in a safe and sustainable way providing owners and captains with far greater options and flexibility for such works in the Southern Hemisphere,” explained GCCM’s CEO, Mr Trenton Gay.

“Credit and thanks should also go to GC Marine, Liquid Yacht Management Superyachts Solutions and Sweep Marine for lending their expertise to the solution.”

Collectively, these projects took 34 weeks and both Captains have walked away from the process thrilled with the results.

“We arrived at GCCM in February, before COVID-19 hit Australia, with the intentions to do a full vessel spray-paint alongside the marina dock and in the water. On its own this project would be a feat and a first for any Australian marina or shipyard even before the added complication of a pandemic,” explained Captain Clinton Roos, SuRi.

“Since the beginning of the project, the support I received from GCCM was inconceivable.  They truly went out of their way to get the necessary approvals for the project and to ensure the safety of all the crew and the vessel.”

“When lock down began, the GCCM team made sure that our project was never stopped, slowed down or was hindered in any way.  These are merely a few reasons I believe that GCCM’s facilities are truly unrivalled, making it a crew, captain and owners dream.”

In the case of Dragonfly, they took the opportunity to complete an internal and engineering maintenance perdiod managed by GCCM’s internal Project Management team.  A delicate process which meant scheduling a lengthy scope of works around the paint works and adhering to COVID-19 social distancing restrictions.

“The overall experience in the yard and in the care of GCCM is excellent.  As with all maintenance works, the projects grow and evolve.  The dynamic team at hand in the yard responded superbly to the challenges faced and we look forward to returning to the GCCM facility,” stated Captain Mike Gregory, Director of Maritime Operations at Fly’ Fleet.

Based on these two successful projects, local and state government authorities have, for the first time, issued an Environmental Authority (EA) for GCCM on an ongoing basis which will dramatically increase the refit capacity not only on the Gold Coast yet also the East Coast of Australia.

GCCM is already fielding enquiry from a number of domestic and international yachts for similar projects to be completed at their Coomera facility.

Boating goes green Another renewable energy project is working full steam ahead at GCCM. And is getting some exposure in the press 🙂  Illustration
Read Article
Blog

Free Up Plastic for #PlasticFreeJuly

One more step towards a circular economy: recycling plastic waste at GCCM   Within the scope of our Closing The Loop
Read Article
Get In Touch