Well worth the trip 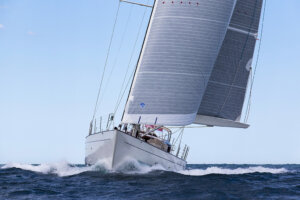 Some years ago, Alex Martin left his native England to travel to Sydney for a single season as a sailing instructor.  Not too far away on the French Mediterranean coast, S/Y Atao – a 82-foot French built sloop – was turning heads with her graceful lines.   She eventually grabbed the attention of her Australian owner and like Alex, made her own way to the iconic Sydney Harbour.

Seven years later, Alex is still enjoying sailing in the warmer waters of the southern hemisphere and in their new home, miles from their respective origins, Alex became the captain of Atao.  His first order of business was to sail up the coast to Gold Coast City Marina and Shipyard (GCCM).

Atao was one of the chartered superyachts in the line up for the 2019 Australian Superyacht Rendezvous held at GCCM.  As the only masted superyacht at the event and as a perfect example of a yachting aesthetic of another era, Atao was the darling of the rendezvous.  Buoyed by the interest in the yacht, Alex and Atao remained at GCCM to complete some maintenance work.

“The owner of Atao had had a persistent issue with the retractable dagger board so we took the opportunity to lift her and finally rectify the problem,” explained Alex.

Over the six weeks the yacht was at GCCM, Alex called on Bradford Marine, Watsons Engineering, Wicked Fabrication, Gateway Hydraulics, Classic Trim, Harbourforce, Southern Seas Marine plus some external contractors for a scope of works from detailing to tooling specific parts for the refurbished lifting keel.

Alex continued, “We also used the time to complete a range of works calling on many of the contractors onsite at GCCM.  Even if we didn’t participate in the Rendezvous, the trip was well worth it as the yard was 50% cheaper than Sydney and the contractors were very price competitive.  We have also encountered a really friendly community both in the GCCM team and the tenants.  I have had access to a courtesy car which is invaluable for someone away from their home port.”

S/Y Atao left GCCM in mid June to sail back to Sydney for a photoshoot before heading north to compete in Hamilton Island Race Week.  She will remain up north to give charter guests the opportunity to gracefully sail the Whitsunday Islands on a very classic yacht.  The GCCM team look forward to seeing her there.

Marina’s have traditionally been associated with docks and ropes, however in recent years, dry boat storage (or drystack) has grown in popularity in Australia, particularly
Read Article
Blog

Electronics play a pivotal role in the safe operation of your boat yet also the enjoyment of it.  It can seem like a very complex
Read Article
Blog

Top 5 cleaning products for a boat in tip top shape

There are so many boat cleaning products in the marketplace; it is hard to tell which are the best for you.  As summer approaches and
Read Article
Get In Touch