It’s been a busy past few months for Lisa and Trevor while they have renovated a house, planned a wedding and purchased a cruising catamaran to refit to their ideal sailing vessel.  As with many busy people, the key to success is finding the right partners and Lisa and Trevor felt they did so when they lifted their 44-foot catamaran onto the shipyard at Gold Coast City Marina and Shipyard (GCCM) to turn S/V Merlin to S/V Music.

Merlin started her cruising life in South Africa where she was built to specification for the first owner who left Cape Town to cruise around the world with a young family, eventually ending up in Brisbane where they decided to settle and make their home.   After living onboard for a number of years they sold the boat to Lisa and Trevor who saw her potential as she was fully equipped for blue water sailing so they purchased her and moved onboard.

With their own wedding to plan – and what better place to hold a wedding than on your own catamaran – and a house renovation underway, Lisa knew they needed a yard who would support them with quality work done on time while they got on with their busy daily work lives.  She did her research and spoke with Travis Slatter at GCCM who quickly understood what was needed and made, ultimately, the best suggestion; encapsulation on the yard.

“We needed to paint the yacht.  She had completed some extensive cruising and needed a little love.  Yet we did not want the hassle of removing the mast so when Travis suggested tenting her on the yard to save on the costs of removing the mast and the expense of a shed hire, we had confidence GCCM knew what we needed,” explained Lisa.

So, in mid-February, S/V Merlin sailed down from Brisbane to GCCM and was lifted onto the yard where onsite contractor, Sweep Marine Services, expertly tented the boat leaving the mast exposed.  Then it proceeded to rain and rain and rain (Cyclone Oma had arrived), yet the encapsulation did not falter and work on the boat was able to continue with few delays.

“We took the opportunity to update the interiors and rear deck with new upholstery and Dianne from Classic Marine Trimming well and truly took the hassle out it.  SPMG assisted with servicing some of the systems onboard to ensure we were set for some serious bluewater cruising and the rigging was inspected,” continued Lisa.

Lisa and Trevor used onsite and offsite contractors selecting those who they felt were best for the job.  GCCM welcomed them all. 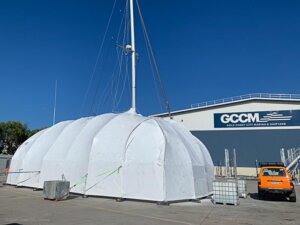 Five weeks later the “new” boat was unveiled – she had become “Music”, a named selected from the lyrics of a song called “Southern Cross” by Crosby, Stills and Nash.  Travis and his team placed her back in the water and she returned to Brisbane ready for the pending nuptials of the happy couple.

On behalf of everyone at GCCM, we wish Lisa and Trevor fair winds, following seas and bright skies.

Marina’s have traditionally been associated with docks and ropes, however in recent years, dry boat storage (or drystack) has grown in popularity in Australia, particularly
Read Article
Blog

Electronics play a pivotal role in the safe operation of your boat yet also the enjoyment of it.  It can seem like a very complex
Read Article
Blog

Top 5 cleaning products for a boat in tip top shape

There are so many boat cleaning products in the marketplace; it is hard to tell which are the best for you.  As summer approaches and
Read Article
Get In Touch