Another renewable energy project is working full steam ahead at GCCM. And is getting some exposure in the press 🙂 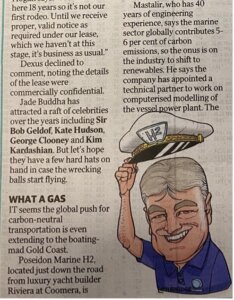 Peter Mastalir from Seapower Marine is working on a hydrogen boat, and it will be built here at the Coomera Marina precinct.
The engineering feasibility study work started, and they are currently offering a first-stage investor offer opportunity.

Pete is one of the Directors of the company @PoseidonMarineH2 and the principal engineer for the project through his engineering consultancy Dynamic Efficiency. They are targeting defence forces, ferry operators, police, and other maritime operators. Poseidon Marine H2 plans to have a provisional patent and certification by early 2023.

Griffith University is working with Poseidon Marine H2 and Seapower Marine Gold Coast will be assembling & testing the proof-of-concept prototype for Q3 2023.

The versatile boat will operate off multiple fuels, including hydrogen and diesel. This will allow customers and manufacturers to purchase their patented technology that operates off current fuels and a carbon-free alternative when the infrastructure is in place.

174 countries have committed to the Paris Agreement on climate change, pledging to become carbon-neutral by 2050. This will mean a shift in current energy production, and a move towards hydrogen as a primary energy source.

Known as the fuel of the future, hydrogen is one of the most viable options for decarbonising the transport industry, which accounts for over one-fifth of global CO2 emissions.
As net-zero becomes the universal standard among western governments, hydrogen is estimated to grow into a global market worth US$201 billion by 2025.

Seapower Marine is based at GCCM, they are a team of factory-trained accredited marine engineers with over 100 years of combined experience. They deliver specialised marine engineering with quality and assurance for all marine engines and generators.

Free Up Plastic for #PlasticFreeJuly

One more step towards a circular economy: recycling plastic waste at GCCM   Within the scope of our Closing The Loop
Read Article
Blog M/Y PALOMA rules the waves thanks to MARINE SOLUTIONS AUSTRALIA