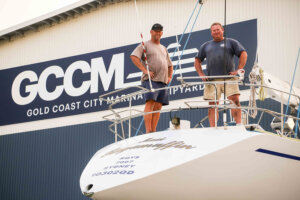 Australian Marine Enterprises (AME) quietly and modestly surpassed a massive milestone recently. Since opening their doors in 2007 at Gold Coasty City Marina & Shipyard (GCCM), AME has now had a hand in refitting and repairing over 2,000 vessels. A milestone that Owner and Director Graham ‘Scooter’ Eaton credits to passion and a genuine love for the marine industry.

“We’ve been in the industry for so long,” explained Scooter, “not just as AME, not just as boat builders or a ship refit and repair company. We love boats and the industry. That’s what makes it a successful recipe.”

Scooter is a prime example of what it means to thoroughly enjoy what you do. Scooter began racing at The Royal Brighton Yacht Club in Melbourne when he was 10 years old and began his apprenticeship as a Boat Builder/Shipwright at the same club. The shift into the marine trade was a natural progression.

After his apprenticeship, Scooter spent time away from the trade, working and sailing along the east coast of Queensland before diving back into boatbuilding in Airlie Beach and the Whitsundays. After years working on the Sunshine Coast, building boats for Jon Sayer, Scooter shifted South where he worked in Brisbane shortly before calling GCCM home in 2000. It was then he began working for colleague and friend Joe Akacich (Black Joe) under Blackline Shipping on the M/Y My Way. Akacich sold Blackline Shipping in 2006 and began the consulting business Blackpond Marine Consultants but not before encouraging Scooter to establish AME.

“Joe got us all together and said, Gold Coast City Marina needs another company to provide quality refits,” said Scooter. “I didn’t think at that time that would be still here in 2021 almost 2022. It was just something that we were doing and see what happens.”

Over the years, AME has grown and it’s also downsized. Scooter believes where they are now is right where they need to be. 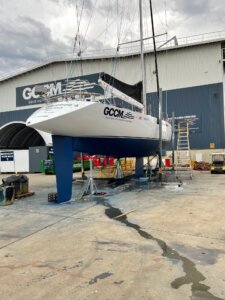 Scooter can often be found at sailing regatta’s all along the coast of Queensland and will always answer any questions boaties might have regarding their vessel. He has been trusted with such high-profile vessels like S/Y My Way, M/Y Achilles III, and Jessica Watson’s Ella’s Pink Lady prior to her famous solo sail around the world.

When customers bring their vessels to AME they are enlisting the knowledge and connections of the hardest working marine tradesmen in Australia. The work speaks for itself. Customers who have been fortunate to work with Scooter and the crew at AME over the years have all been very appreciative of the up-front, no-nonsense communication when it comes to each project.

“There’s no grey area and everybody knows what’s going on,” said Scooter. “There’s no surprises at the end and no one is left wondering ‘oh, how did that happen?’”

Scooter has even gone so far as to spend his weekends aiding customers with issues they may have difficulty to solving on their own.

Previous customers, Peter and Judy enlisted Scooters help while he was in Mooloolaba, Queensland for their vessel Mango Tango.

“From the moment we first made contact and throughout the time the boat was on the hard, [Scooter’s] help, advice and hard work from everyone at AME was always much appreciated,” exclaimed Peter and Judy.

Scooter and the team of directors at AME, Neil O’Brien and Glance Phipps, have worked hard to gather this exceptional team of marine tradesmen and hope to transition the knowledge from themselves into the next generations. With decades of experience between the three of them, they have so much to provide the next generation of boatbuilders.

“There’s no reason why AME can’t stay at GCCM indefinitely,” said Scooter. “I’d say Gold Coast City Marina would have some of the best trades that I’ve seen and had to work with.”

Already, the family-like crew working under the AME name has immense promise.

“They’re fantastic tradesmen with a great attitude,” said Scooter. “I don’t micromanage. We’ve got the faith in them so you can give them jobs and you know that it’s going to be good work at the end of it.”

Another working his way up the pipeline is Scooter’s son, Mitchell Eaton. A fourth-year apprentice with AME and most recently nominated for

“Mitchell is about to be a fourth-year apprentice,” stated Scooter. “I’ve been talking to his TAFE teacher from time to time and he reckons Mitchell’s unreal. He wasn’t really interested in school but now he’s found something he’s interested in and it’s coming to the forefront. He loves it which makes it easy.”

Scooter hopes the next step for Mitchell will be to take on more with AME but fully supports whichever road calls to him.

“He might go work on a superyacht as a boat builder and see what that’s like,” explained Scooter. “We would promote him in doing that so he can get a bit more experience elsewhere. Whether it’s in this part of the industry or another.”

Ideally, Scooter would love for Mitchell to stay with AME so he could take on more, but he understands the necessity of getting out into the industry and the priceless knowledge from ‘real-world’ experiences.

Until then, AME will continue to provide support to the marine industry from their home base at GCCM with the crew that is known and respected to many within the industry.