Recently the shipyard team at Gold Coast City Marina and Shipyard (GCCM) lifted M/V Nelson Star into one of the sheds to complete refit works and a five-year.

Recently the shipyard team at Gold Coast City Marina and Shipyard (GCCM) lifted M/V Nelson Star into one of the sheds to complete refit works and a five-year AMSA renewal survey. Yet it wasn’t the first time her owner, Darren Lack, had been to GCCM. In fact, as a commercial vessel master, AMSA marine surveyor and director of MotorSail Pty Ltd, Darren has been bringing boats to the facility since it opened in 2000.

Darren’s first experience with GCCM was for a 9-month refit of a 30-metre private yacht he was in charge of in the early 2000s. It was at that point he created relationships with many of the onsite tenants which has served him well since. Mostly, Darren was acting as either vessel master or project manager serving on behalf of the owners. 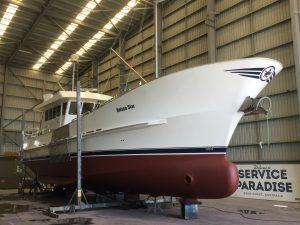 However, this year, Darren is the owner and the boat is M/V Nelson Star. To those who witnessed her lift, it was clear Nelson Star is a special vessel. Special indeed, she is a one of a kind in Australia. Built in Tasmania in 2012 by Badenach Custom Boats, Nelson Star was designed by legendary Alan Muir as a working cray fishing boat for George Badenach himself. She had to work the extreme conditions of the exposed west coast of Tasmania yet have a shallow draft to enable her to navigate her homeport entrance at Smithton on the NW coast of Tasmania. As a result, she is the only known solid fibreglass boat of this nature in Australia and a fantastic sea boat with impressive lines.

When searching for a boat this time around Darren wanted a true general purpose vessel for MotorSail, one that could perform a variety of tasks commercially and Darren couldn’t go past the 18-metre Nelson Star. The concept was to upgrade and convert her from a single use fishing vessel to a multipurpose expedition vessel. He bought her and then completed the gruelling trip from Port Lincoln in South Australia to his home on the Gold Coast where the project began.

“It was the middle of winter, we had gales for most of the trip from a number low pressure systems one after the other so for most of the trip home we had heavy weather and pretty ordinary sea conditions. The boat took it all in her stride and didn’t misbehave once,” said Darren. And efficiently. The single screw vessel is powered by a Yanmar 6HA2M-350Hp engine consuming a highly economical 12-14 litres an hour giving a cruising range of 4000 nautical miles at 8½ knots.

Slowly but surely, Darren has been meticulously upgrading the systems and accommodations onboard to fulfil the boat’s future expeditions. Then the time came to lift Nelson Star and once again, Darren selected GCCM.

Darren explained, “When selecting a yard, I look for a variety of things: lifting equipment, storage space, sheds and amenities. Most importantly, does the facility offer the labour and materials required to complete the scope of works? Which is where GCCM has a real advantage. There is every conceivable trade onsite and over the years, I have developed strong relationship with many of the original tenants. I come back because they do the right thing by me.”

This time around the scope of works were heavy on engineering and Darren was supported by Watson Marine Engineering, Bradford Marine, Wicked Fabrication, Gateway Hydraulics, Blackpond Consultants, Sweep Marine and Oceanic Design and Survey.

“I am not sure how many times I have hauled out at GCCM over the years, but I can honestly say that the level of service I experienced this time was exceptional. From the time I came alongside to being blocked in the refit shed every one of your team provided real service that to be honest I haven’t’ seen for quite a while,” finished Darren.

Now the boat is back in the water, Darren will be enjoying some well-deserved downtime.

“On behalf of everyone at GCCM, we thank Darren for his continued support. He is a true professional and look forward to working with him in the future,” offered Kevin Altera, GM of Operations and Business Development. 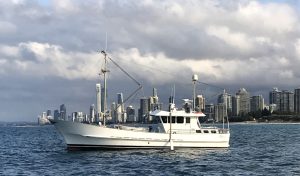